This year, my husband gave me The Adventure Challenge: Couples Edition for Christmas. Each adventure is a scratch-off mystery we must commit to before learning about it.

I loved it. Growing up, my favorite sentence was let’s go on an adventure. It still is.

Our first adventure was “The Blind Baker.” During the challenge, we had to bake a pie from scratch, but only one person could do the baking. Oh, and they had to be blindfolded. The other had to direct the baker using their hands and a mere three sentences. The person with the least skills had to do the baking.

I suck at crusts but shine when it comes to fillings. Mark is an expert crust maker, so we split the tasks.

By the end, we were both covered in gluten-free flour, but the results speak for themselves. 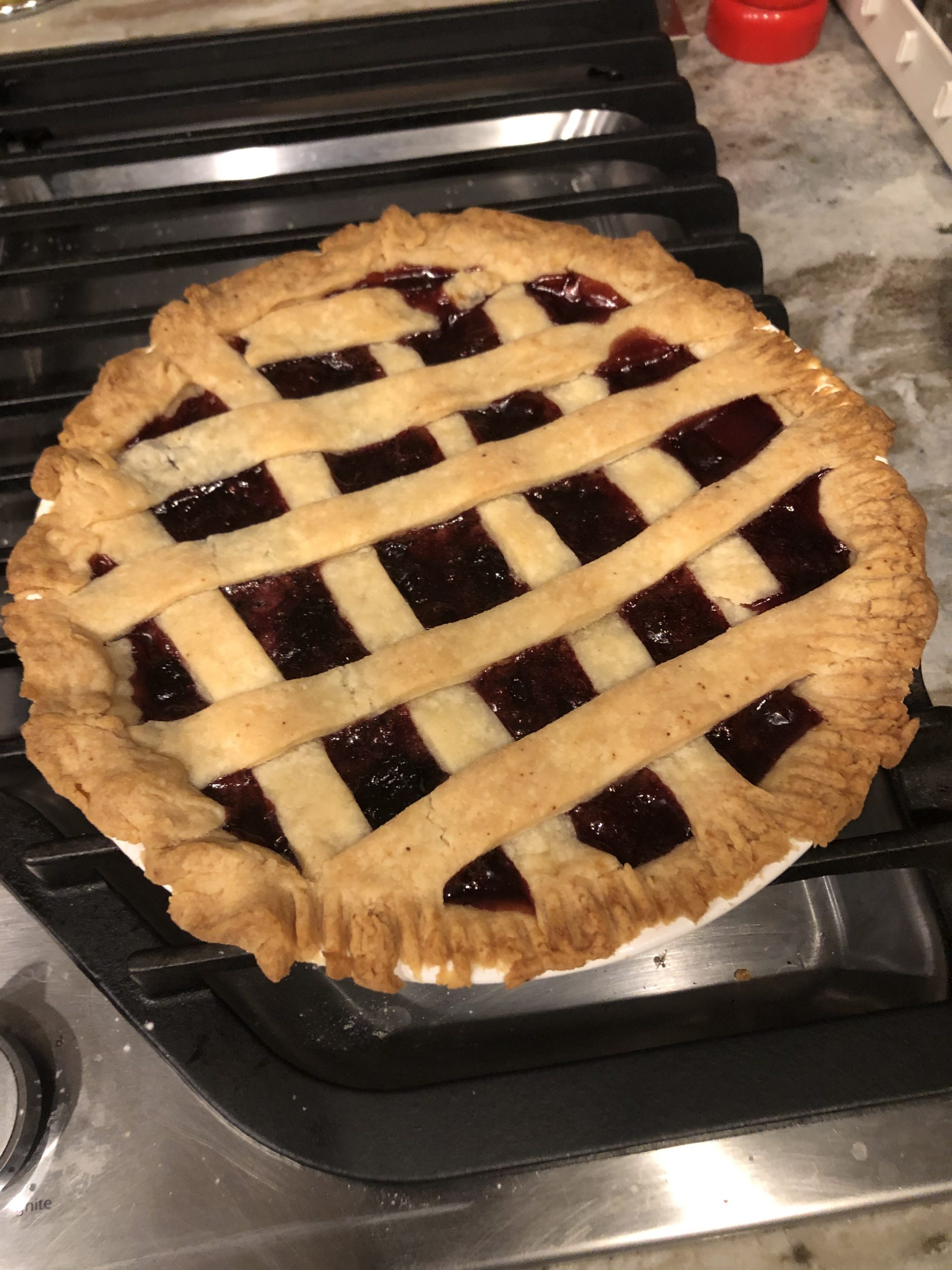 Baking a pie while blindfolded is a lot like writing a first draft. It’s messy. You’re not exactly sure what’s you’re doing, and while you can consult some great guides along the way, you must trust the process.

First drafts have been given many names. Anne Lamott coined the term “shitty first draft” in her namesake essay in Bird by Bird. In Seven Drafts: Self-Edit Like a Pro from Blank Page to Book Allison K. Williams calls it the vomit draft. She shares a tweet by Jenny Elder Moke, author of Hood, in the first chapter of the Vomit Draft section that helps us see this process as more than word pooping or regurgitation.

“Y’all stop calling your first draft garbage. Garbage is what you throw out when you’re done with a meal. What you have there is a grocery run—a collection of items that will eventually make a cohesive meal once you figure out which flavors go together.”

Grocery runs are about gathering supplies, not generating trash (although I will always love Anne Lamott’s phrase because a. swearing, b. funny, and c. Anne Lamott).

While collecting your groceries is the task you want to spend the most time on, it’s important to determine what you’ll bring with you to the store. For example, if one of your New Year’s resolutions is to lose weight or eat a healthier diet, arriving with a full stomach and carrying a list will help you achieve those goals.

The same is true when writing a first draft—or really any draft—because our job is to approach every writing task with a beginner’s mind.

Seven Drafts includes a succinct set of pithy strategies you can bring along, like commitment, inspiration, realistic expectations, and most importantly, time management.

Allison tells you to write first. That means ignoring your inboxes and the dishes. As you do this, get excited by thinking about stories, reading widely in your genre, and recording your momentary bursts of genius on scraps of paper or in your phone.

More importantly, she reminds us that priority means one thing.

“Sure, your priorities may change as you shift from your art self to your family self or from office to the studio to your home. But at any given time, you can only have one priority. Pick one and pick its purpose.”

When you know your priority and its purpose, you’re more likely to commit to it.

Once you’ve identified your priority, take tiny steps forward, and I would add, celebrate the fuck out of each one.

As a coach, I regularly work with writers who want to set ambitious goals that include regular three-hour writing dates and aggressive word counts. But most can’t pull this off, even when they have oodles of free time.

These writers give me cross-eyed looks when I encourage them to tamp down their expectations and set smaller goals. But I know this works.

Allison illustrates this in Seven Drafts by sharing something Andre Dubus III revealed during a writing workshop she attended.

“Dubus III wrote House of Sand and Fog after his three kids were born. He and his wife both worked full time and hours outside of work were focused on parenting. He taught as an adjunct at several schools and picked up construction work on the side. How did he write?

Seventeen minutes at a time.”

Those seventeen-minute sessions resulted in a New York Times bestseller that won a National Book Award and was adapted into an Oscar-nominated film.

What will you do with your seventeen minutes?

To glean more of Allison’s wisdom from the Vomit Draft, buy her book. Next month, I’ll share one of her gems from the Story Draft that will change how you begin your project.